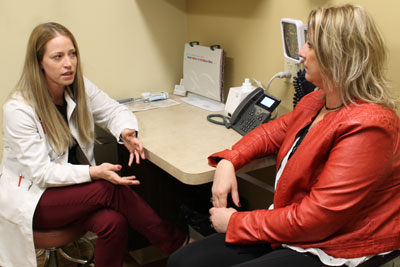 To treat women who experience heavy bleeding (defined as soaking a tampon or a pad every two hours or less OR periods that last longer than eight days), Brookings Health System offers endometrial ablation, also referred to as uterine ablation. It is used when other treatments for abnormal uterine bleeding are unsuccessful.

Endometrial ablation is a process by which the uterine lining is destroyed through heat, radio-controlled frequency, or other method to reduce or prevent further uterine bleeding. It does not require incisions. A gynecologist inserts slender tools through the passageway between the vagina and cervix.

Endometrial ablation is recommended for women who are done having children but haven’t gone through menopause. It is not a form of sterilization and women should still use contraception. Pregnancy may be possible, but it will likely be hazardous and end in miscarriage.

Gynecologist Larissa Bennis talks about an issue many women face, abnormal uterine bleeding, and the possible treatments for it, including endometrial ablation.

With the current rise in COVID-19 cases spread by the omicron variant, Brookings Health System encourages community members who have started experiencing mild COVID-19 symptoms or have been exposed to someone confirmed to have COVID-19 to use an at-home, self-test for diagnosis.