What Procedure Did You Have at Brookings Health System?

I had a umbilical hernia, so, my doctor, Dr. Cecil, recommended that it be taken care of before any complications occurred. And he told me that the surgeons up at the hospital...good reports on them. So, I called up and made an appointment with Dr. Oey.

What Caused Your Hernia?

I think what happened is, many years ago, I lifted a heavy piano when I shouldn't have and it tore something loose. As the years went by, the hernia was more and more pronounced to where it reached a point where it became dangerous and it had to be taken care of.

How Did Dr. Oey Make You Feel Before Surgery?

Dr. Oey just made me feel at ease right away, as soon as she walked into the room, very friendly, very professional, and very exact on the describing what needed to be done for my procedure. She just has a way of making you feel at home and that I was part of the process as far as the operation. She included me in on it, so, I felt comfortable with the decisions that were made. At first, I sort of had qualms about a robot doing surgery on me, but she told me it was just...the robot is an extension on her hands, actually. So, she reassured me that there would be no problem with that and put me at ease, so surgery would be scheduled to be taking place.

Why Did You Feel da Vinci Robotic-Assisted Surgery Was the Best Option?

Dr. Oey told me that one of the options I had, as far as the surgery, and probably the least invasive, would be the robotic surgery. She explained to me that she had received a lot of training as far as the use of robotics. She made me feel comfortable that this was the best course of action for me. She explained that three incisions had to be made around the navel area and the robotic arms, which were an extension of her hands, were able to enter and place in a mesh, which would alleviate the hernia problem.

What Do You Remember From the Surgery?

Well, in the morning I was sort of anxious knowing that I'd be having surgery, but once I arrived here and was met at the door and guided to where I needed to go, went into the prep room, where it was all business, but it was friendly business as well. They made me feel at home. They prepared me properly. Dr. Oey came in and explained to me about what was gonna be taking place in the operating room.

How Was Your Family Included During the Process?

When I was waiting into the recovery room, my wife was with me and she explained to me that she was…after the surgery was over with, Dr. Oey came and visited her and told her that there was no complications, everything went fine and that I'm in a recovery room. It gave a lot of peace to my wife, which definitely was, I'm sure, a big plus for her.

How Was Your Pain Managed After Surgery?

Surprisingly, I thought there would be pain with this type of surgery, but I didn't feel any pain at all, even during the recovery. There was a 15-pound weight restriction placed on me, and since my wife is an ex-nurse, she made sure that there wasn't anything heavier than 15 pounds to lift, even though I wanted to many times. But she kept me in check.

What Do You Appreciate About the Staff?

The Brookings Health System has really impressed me. When as soon as you walk through the doors, there are people that greet you. They ask if we need directions. It shows that they have a good heart, that their mind is set to give the patients a good experience. The nurse staff, the operating room staff, everybody involved in the procedure, they all had smiles on their faces and they all welcomed me and made me feel like I was the center of attention.

What Did You Appreciate Most About Brookings Health System?

I think what I appreciated the most was the people that I met. These people that are in healthcare here at the hospital, they're our neighbors. Our children go to school with their children, attend sometimes the same church. The health caregivers are invested in this community and its people. And it's good to know when you come in that you're gonna be taken care of like family because actually, you are a community of family members.

Would You Recommend Brookings Health System?

I would recommend it because the high degree of healthcare you receive, it's ranked way up there as the services they provide. I think it's a place that makes you feel comfortable, that makes you feel confident, that when you walk through those doors people are gonna pay attention to you. They're gonna take care of you. The personal care that they show you is just outstanding. 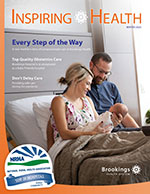