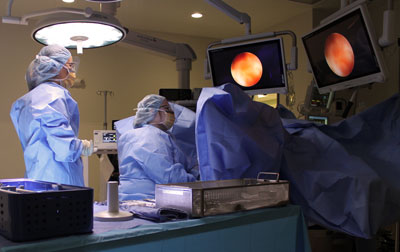 Hysteroscopy is a diagnostic procedure in which a gynecologist examines a woman’s uterus by inserting a small camera through a thin, lighted tube into the vagina. It can be performed in conjunction with other procedures, such as dilation and curettage (D & C).

Hysteroscopy is often used to help identify the cause of heavy or lengthy menstrual flow (defined as soaking a tampon or a pad every two hours or less OR periods that last longer than eight days), bleeding between periods or bleeding after menopause. Once a gynecologist determines the root cause, she can work with the patient to determine a suitable treatment.

In addition, a gynecologist may correct an abnormal condition that has been detected during a hysteroscopy. This includes removing polyps or fibroids, non-cancerous growths found in the uterus, as well as removing adhesions, bands of scar tissue that form in the uterus.