My name is Jim Stein. I'm a resident of Brookings now. We moved here in early 2015. Basically, we are from Pierre, South Dakota, where we moved in 1974. I worked for the State of South Dakota in telecommunications until full retirement in 2010.

What brought you to the Brookings Health System emergency room?

The first time, I had a DVT, a blood clot in the leg. After things were going well, I had a night where I was feeling not at all well. So we came back and later it was diagnosed as acute bronchitis. I was coughing and all of these things were going on. And I think they just, to be safe, which I appreciate, they decided to go ahead and hospitalize me.

How was your hospital stay?

Great. It really was. This facility is...well, let me just give you an example of what was so good about it. When I shut the door to the hospital, sound was out and you could sleep without hearing what's going on elsewhere there.

How was the staff?

The staff is wonderful, just about wherever we've been here in the Brookings Health System. And everybody from the receptionist who gets you in quickly, get you admitted, the staff, they treat you very well and friendly, but without any signs of panic, very cool, which helps because nobody wants to be in the ER. The person that did the sonogram was very good about telling us what it was and then they brought us up-to-date on what we suspected.

How did the staff support your family?

They never made my family feel unwelcome or that they were in the way. And that's no small thing. When the family came, they were accommodated. They could have coffee if they wanted coffee. They would sit and explain things to them if there was a question from them. And so, they were made to feel a part of the whole treatment. And I do appreciate that.

What care did you receive at the cardiopulmonary rehab center?

Some of my favorite people are there. And I think it's great that they are referred to as a team because they are. And they have been, I think, a big part of my recovery to this point. They too all have a sense of humor. And if you go down and you watch, it's just an amazing operation down there, if you will. They're taking vitals all the time. Blood pressure, heart rate. They're watching you so if you have any problems on the machines or develop any problems, they're right there with you. They get you sat down, they get you relaxed, and they're just with you for the hour or so that you are there. So, like I said, they give me a great feeling about Brookings Health System. I do like them.

What benefits have you noticed following cardiopulmonary rehab?

I am breathing a lot better. I'm able to walk further than I was able to and my strength is coming back. And so, it's the things I need at this point. And they're watching the vitals, which I think is a big part of it, not only for them, but for the patient.

What do you think of the hospital expansion and renovation?

I think it fits Brookings. It's light. It's airy. And I will mention again the receptionist, I've been in the west entrance, the ER entrance, and the southeast entrance, and these people are good at what they do. So I don't wanna forget them. But you come in and if you're lost, and I got lost one time coming out of the elevator, usually the first one that comes along will help you find what you're looking for. You're not left alone here. So I think Brookings was a good choice for us to move, for our move. And this, I think, just fits in, makes our decision even better.

Free, Walk-In Vaccination Centers Set for May 13 and 20

The Brookings County Pandemic Planning and Coordination Committee (PPCC) will hold free, walk-in COVID-19 community vaccination centers, also referred to as points of dispensing (PODs), on Thursday, May 13 and Thursday, May 20. Both events will run from 8 a.m. to 4 p.m. at Swiftel Center in Brookings. 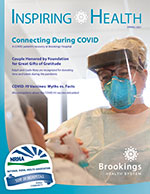