My name is Danielle Bohn and I live in Brookings with my family. I was born and raised in the Brookings community. In our free time, we like to spend time outdoors. We do a lot of camping, swimming in the lake, those kinds of things.

What brought you to Brookings Health System?

Last March I came to Brookings Health System when my husband was sick and had to bring him up to the emergency room. He had been in and out of the clinic for a few times in the few weeks prior to us coming to the emergency room and he ended up staying for over a week. We were transferred up to the hospital and he had a spinal meningitis infection that had to clear up while we were here.

How did the new intensive care unit help your husband's treatment?

At first, when they told me that he had to go to ICU I didn't really know what to think. They could tell I was pretty distraught over it just because I thought it was way worse than it was going to be and they made it very cozy, they made sure we had everything set up in there so that it was as comfortable as it could make for us. I was very amazed with all the advances those rooms had made since the last time I had a tour of the hospital.

What is eICU patient safety technology?

He was just being monitored 100% of the time as much as they possibly could. So, that was very comforting to know that not only was there staff here, but there was staff in Sioux Falls that was also monitoring him and if something was going to happen, they were going to catch it.

How did the ICU benefit your family?

When he was transferred into the ICU, he was very close to having to go down to Sioux Falls. Again, they could tell that that was going to be very hard for us as a family. So, I feel like his stay in there was what was able to keep us in Brookings and for me, that was the number one priority next to, of course, him getting well. Our three kids last year were in three different grade levels, so I had three different drop-offs and three different pick-ups every day in the school systems and that was very helpful for me to be right here in Brookings. I felt like he was getting just as good of care here as he would have had in Sioux Falls. There was no reason for us to be in Sioux Falls and I would hope that everyone could see the benefit of the ICU here and know that you can stay in the Brookings community to get the same care.

How did the staff support you?

The one thing that really helped me through it was the nurses here on staff. I felt like they were relating to me and they really knew where I was coming from because I didn't wanna lose a 39-year-old husband and that was very hard for everybody. My husband and I still talk about this, how the nursing staff was absolutely amazing from right when we came in here until we left. They were very supportive of me, they kept asking me and they would know of my schedule. "Okay, yep, you're here because you dropped the kids off and he's okay now if you need to go pick them up." They really just took the time to get to know me and know that I had work and I had other commitments as well too and those timeframes. They were making sure that I was stopping and eating and resting and they would even bring me food. I remember one of them bringing me a turkey sandwich just because she could tell that I was pretty drained at that point. They were absolutely fantastic.

What did you appreciate most about Brookings Health System?

I appreciated the time that they spent with him. When he was in ICU, it was obvious he was extremely sick and needed to be very high priority for everybody involved and we always felt like he was high priority. They never didn't come check on him in time or anything like that. They kept us in the loop and he was number one priority for many people those few days.

Would you recommend Brookings Health System?

I would absolutely recommend Brookings Health System. We've continued to tell our family and friends about Matt's care and we're pretty private about it but we have shared that we would encourage anyone to stay here. There is no reason to travel in a lot of situations and it's more convenient for everyone involved. There's enough that you're worrying about when you have a loved one in the hospital. You don't need to add two, three hours a day of travel on top of that if you can avoid it.

How is your husband today?

He is doing really well today. I would say he has made a full recovery. It was a long road and he was very weak and very sore and tired a couple months after the infection because it took so long to clear. However, we feel like he's doing really well and we wouldn't hesitate to come back for the same care if something were to happen again.

To show support of local healthcare providers during the pandemic, South Dakota State Athletics is honoring 11 Brookings Health System team members who have impacted the health system’s ability to provide care for the community during COVID-19. 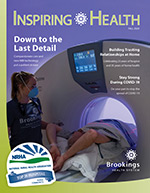