Supporting Family at the End of Life

I'm Terri Hein. I live here in Brookings and in my free time, I like to spend time with my family and our four-year-old granddaughter.

Why was your stepfather admitted to Brookings Hospital?

My stepdad had taken many, many falls, but he had fallen and ultimately he shattered five ribs. And one rib went into his lung and just sat there.

What were your impressions of the hospitalist program?

I mean, those hospitalists, I can't believe that every hospital doesn't have that. I was bummed when I first heard that they were going to have hospitalists and that, you know, the regular doctors wouldn't be coming over here. This is such a much better experience. They're here, they're here in the building.

How did the nurses help you during your stepfather's passing?

Stacey, I've had her before when I've been an impatient, but she had just come on duty, I think. And it was less than an hour when he passed away and I was holding him, his arm and stuff when it happened. And she was right in there and she was with me the entire time. I could not have gone through that without her. And I could not have gone through it probably without the night nurse. She was just as, you know, compassionate too. That was the best experience.

How did the booklet "Gone from My Sight," help you?

I could hear this horrific noise and of course it was him, you know, breathing or trying to. It was that horrible rattle that just continued, you know. So Bonnie, who knows my family and I met her that day, she was right there because, of course, he was unconscious. I wasn't expecting that at all.

And then that booklet also that you guys have here. She immediately, after like probably about an hour, she gave that to me. I didn't look at it then but I did after, you know, we had left the hospital a few days later. I read that and it was, I think it's only like seven pages or so. I could only literally get through like the first few paragraphs here and there. And then it was just like, "My God, we have been watching this whole process for like three months, just like that book said." So that is the most phenomenal thing that I could have been given. Even though I didn't read it here, I had that for afterwards. So that answered a lot of my questions too.

Why did you feel comfortable facing your fear of death?

I knew it was happening. I knew it was going to be happening and I chose to stay. But that says a lot also about how comfortable I felt here in order to go through like one of the biggest fears of my life, is being with somebody when they pass away. You know, they can't say for sure, "Yes, it's going to happen," but we knew. And my husband and my family kept saying to me, "You probably want to go home." No. So my husband and I stayed here all night long. And then it happened early that morning, but I don't think I could have done it without knowing, I don't know, just the whole environment was just amazing. So, I faced one of my biggest fears so I feel like he gave me a gift but also this place did too. 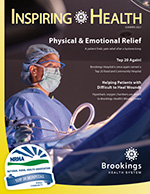